A 2 PM Press conference on Moore Park Siding, approximately 5 miles east of Mellen on Highway 77, will feature citizens who will enter the area deemed “closed to the public” by Gogebic Taconite (GTac) officials.

Citizens from Northern Wisconsin, Iron and Ashland Counties, the Chippewa Federation and those with historic ties to the ceded territory in the Bad River Watershed, and others impacted by downstream degradation from the huge open pit operation have declared their intent to violate the alleged closing of Public Managed Forest Lands (MFL) under a special law introduced by pro-mining Senator Tom Tiffany (R-Hazelhurst). Tiffany said it was the intent of the original pro-mining, streamlined permitting process bill, known as SB-1, and written by Gogebic Taconite attorneys, to “allow degradation of the environment.”

Dubbed the “Hunt to Save the Golden Goose” now laying pristine golden eggs of clean water, forests, lakes, trout streams, asbestos-free air and unlimited prosperity in a growing tourist-based economy, this action will include citizens who have worked tirelessly to prevent a mine, once highlighted to be one of the world’s largest open pit mines by Gogebic Taconite, from destroying the livelihood of regional farmers, tourist-based businesses and resource harvesters. The mining project is headed by GTac Manager Bill Williams, currently under investigation for committing environmental crimes in Spain.

While pro-mining legislation prevailed in the GOP-dominated atmosphere of Tea Party politics and millions of dollars in lobbying contributions during the 2010-2012 election cycle, a wide majority of citizens in Northern Wisconsin oppose the project funded by the 18th richest billionaire in the world, Chris Kline of Florida.

Senator Tiffany introduced further legislation to prevent citizens from monitoring mining exploration and charting sedimentation of trout streams and wetlands, reported by the public and confirmed by the Wisconsin Dept. of Natural Resources during drilling in the summer of 2013. The closure also allegedly prevents Chippewa Treaty citizens from observing and harvesting reserved resources.

Wisconsin Geological Survey shows grunerite, one of the most toxic forms of asbestos, is present on and near the proposed mine site.

On August 15, 2013 the DNR will hold a public hearing at Hurley High School from 10 AM to 8 PM to hear public testimony about issuing a bulk sampling permit to GTac. Those who cannot make the hearing have until September 3 to mail or email testimony.

Listed below are some talking points. Read the articles and watch the short video to learn why we reject this mining law as illegal and immoral, and why we must reject GTac’s bulk sample permit, for the sake of our children, and our land, air and water.

Why There Will Be No Mine

Asbestos and Cancer: GTac claims there is no asbestos in the Penokee Hills, a well-documented fact.

GTAC Lies About Asbestos In The Penokee Hills

GTac left a mess behind from their core drilling

Being Defrauded by GTac: GTac has lied to the public since the beginning and is still lying
We demand that businesses abide by the law, and county agencies enforce the law.

GTAC’s Militia Allowed to Operate Outside the Law in Wisconsin

Mining Company Has No Answers for Iron County Residents 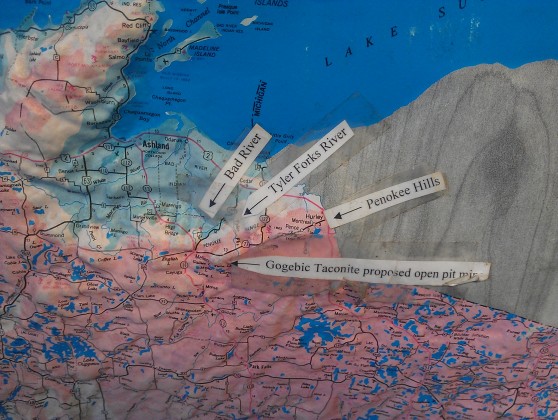 We are writing to you today with the utmost urgency. Northern Wisconsin is being threatened with the installation of a 22-mile open pit mountaintop removal iron ore mine in the heart of the Bad River watershed. Despite overwhelming public outcry, the Tea Party Republican legislators in this state have sold Wisconsin out. The new mining law “legally” allows the mining companies to pollute the waters.

Evidence of the enormous potential for environmental and economic damages are plenty; but perhaps most disturbing of all is the hostile takeover of our state government by legislators who have abandon their oath to serve and protect the people and resources of this state. Despite overwhelming opposition to the new law and an iron mine in this area, legislators who are aligned the ALEC, Cline Mines and Koch Brothers have left us unprotected and vulnerable to a multinational corporation coming into our area, removing local controls and doing whatever they wish with our precious resources.

United in Defense of the Water was formed when elected officials from all levels of government from the Lake Superior basin traveled to Madison to give a press conference at the Capitol. They explained clearly why this mine would bring ruin to the land, water, environment and economy. They countered the propaganda being put out by Extreme Mining Advocates by explaining clearly why the mine will hurt us. All of this has been ignored.

http://www.unitedindefenseofthewater.com has all the documentation needed to understand the multi-level crisis we are engaged in right now in Wisconsin. Here you can see videos of the press conference, and many other links to proof that this mine will hurt us beyond recovery.

Your uncle President John Kennedy spoke at the Ashland Airport on September 24, 1963. On a tour to defend the natural resources of the country, he implored us to protect our natural resources:

The entire northern Great Lakes area, with its vast inland sea, its 27,000 lakes, and its thousands of streams is a central and significant part of the fresh water assets of this nation. We must act to preserve these assets. If we fail to act, then the pressures of a growing population and expanding economy may destroy our natural assets before our heirs can enjoy them.

UPDATE: In the past few days, it has come to light that GTAC, the mining company, has hired a security firm known as BulletProof Security to patrol the site of the core sample drilling in the Penokee Hills. These camouflaged guards are carrying what appear to be semi-automatic machine guns. The entire community is shocked and afraid of this action on the part of the mining company.