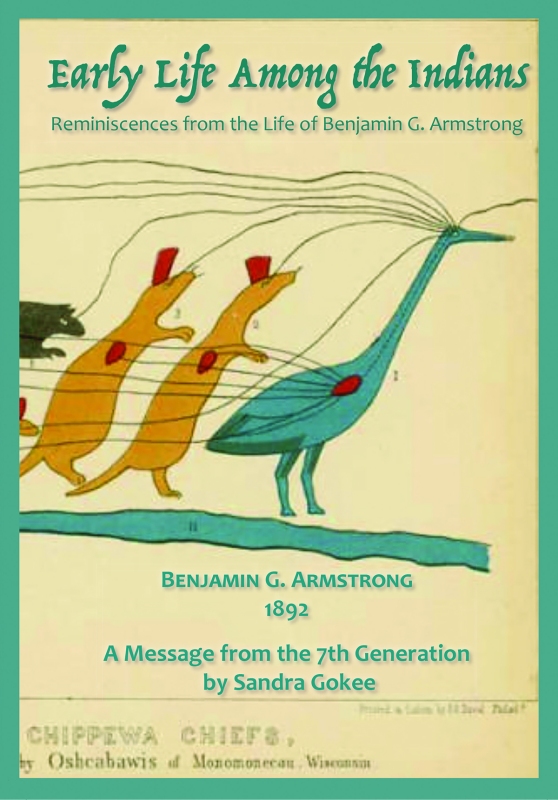 First published in 1892, Early Life Among the Indians is the biography of Benjamin Armstrong, who in 1840 took up his residence in northern Wisconsin. Having learned the Ojibwe language, he became a well-known interpreter. He was known for respecting and documenting the traditional life and culture of the Anishinaabe and became the adopted son of Ke-Che-Waish-Ke, Chief Buffalo, the most respected leader of the Lake Superior bands. In 1852 Armstrong accompanied Great Buffalo and other Ojibwe leaders to Washington, D.C., to plead against the proposed forced relocation of the Ojibwe west of the Mississippi. A meeting between the chiefs and President Millard Fillmore was a success and brought a reversal of the removal order of 1849.

Armstrong did more to humanize Native Americans than nearly any white person of his day. In the end, he writes: “… the unbiased judgment of the future will be that the Indians were found good and were made bad by white people, and that the condition of things has not been one whit improved by white associates, but, on the contrary, has been degraded … [the Indians] saw that the example of the white people was far from the teachings of the missionaries, far from the truth and the pretensions of the traders, and far from justice and right.”

Through his respect and love for the tribes and his connections with Chief Buffalo’s family, Armstrong was granted access to leaders of all the Ojibwe bands. Early Life Among the Indians contains his recollections of battles with Sioux adversaries, memoirs of the Sandy Lake tragedy, accounts of the crucial treaty councils that defined modern Ojibwe life, the arrival of miners and loggers in the Ojibwe homelands, and much more about northern Wisconsin in the 19th century.

This edition also contains a special message from the 7th generation of Chief Buffalo, his great-granddaughter Sandy Gokee, Anishinaabe kwe, mother, a daughter, a student, a teacher, and water protector living on the shores of Lake Superior.

Made possible by a generous grant from the La Pointe Center.

Proceeds from the sale of this book will be used to support the Madeline Island Jingle Dress Dancer Project. 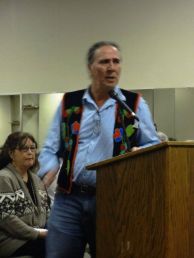 In response to numerous concerns being voiced in our community, the Red Cliff Tribal Council underscores its commitment to review and respond to all mining projects with a potential to impact Lake Superior, tribal lands and Ceded Territories. The Tribe is actively engaged as a consulting party on several proposed and ongoing mining projects through the activities of the Red Cliff Mining Task Force and governmental authority of the Tribal Council.

As announced by Tribal Chair Rose Gurnoe-Soulier, the Red Cliff Band of Lake Superior Chippewa is opposed to current mining legislation in Wisconsin. The intent of SB1/AB1 is to reduce environmental safeguards in order to recklessly advance mining of the Penokee Range despite overwhelming objections by tribal nations and the general public alike. The proposed legislation poses numerous risks to the tribal lifeway and to the resources that the Red Cliff Tribe relies upon to sustain traditional, cultural and subsistence practices. Substantial doubt exists about whether these risks can be avoided or adequately mitigated. This doubt makes it imprudent to engage in mining activities that can negatively impact treaty protected resources which, once damaged, cannot be replaced.

Degradation of environment for short-term economic gain without regard for long-term economic sustainability is unacceptable. The Red Cliff Tribe shares a co-management responsibility of the Lake Superior fishery with Bad River and the State of Wisconsin to ensure long-term benefits from the resource. This responsibility extends to protection of the established economies of tourism and the fishery that the lake provides. Lake Superior is the lifeblood that Red Cliff depends on for survival. We will not exchange our current economic drivers for mining revenue that cannot be sustained.

Red Cliff is a sovereign nation possessing an indisputable interest in the beneficial resource use of the lands and waters of the Ceded Territories. The Tribe has reserved certain rights guaranteed by perpetual agreement that protect essential resources necessary for the sustainability of the Tribe both now and in the future. No action should place undue risk on these treaty protected resources. The Tribe must be assured that the proposed actions, potential risks and cumulative effects to fisheries, wildlife, recreation and sustainability are identified to determine if any adverse effects will result and that mitigations are adequate.

The state of Wisconsin is undermining tribal sovereignty by not offering appropriate consultation to the native nations disproportionately impacted by the degradation of natural resources guaranteed by treaty rights. It is from this lack of proper consultation that the tribal nations stand in solidarity to protect the largest and most pristine of freshwater seas.

Top: The Penokee Hills, target of the 22-mile mountaintop removal open pit iron ore mine at the headwaters of the Bad River; Bottom: a mine in northern Minnesota showing the same area of devastation mining has caused there.