On October 10, 2016 Madison Common Council Alder Rebecca Kemble was arrested in Cannon Ball, ND where she was delivering a Resolution of Support to the Standing Rock Sioux Tribe in their stand to protect themselves from the Dakota Access Pipeline. The resolution was signed unanimously by the Council.

According to an eye witness, also from Madison, arresting officers were Dane County law enforcement, sent to North Dakota at the request of Republican North Dakota Gov. Jack Dalrymple.

According to Cap Times, 10 Dane County sheriff’s officers were sent to Morton County, North Dakota to assist with the water protectors who have gather at Cannon Ball, site of the Standing Rock Sioux water protector encampment.

Dakota originally asked for 40 deputies, which Mahoney said was not feasible for Dane County. Other Wisconsin agencies, including the State Patrol, the Department of Natural Resources and four other sheriff’s offices are sending staff to make up the difference. 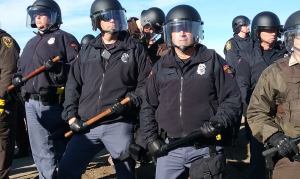 On September 21, 2016, Madison Common Council passed the resolution to support the Standing Rock Sioux and the Sacred Stone resistance camp. Started in April with a hand full of people, the camp has grown to over 3,000, with support from over 200 indigenous tribes from around the world.

“NOW, THEREFORE, BE IT RESOLVED, that the Mayor and Common Council of the City of Madison, stand in support of the Indigenous opposition to the Dakota Access Pipeline and call on all residents of Madison to raise awareness about this important struggle for Indigenous sovereignty and environmental justice and to support the Sacred Stone Camp efforts in any way they can; and,

FINALLY, BE IT FURTHER RESOLVED, that the City of Madison calls upon the United States and the Army Corps of Engineers to obtain the free, prior and informed consent of the Standing Rock Sioux and any other tribe whose resources could be impacted by the pipeline prior to taking any federal action regarding the DAPL that would harm or destroy tribal ancestral lands, waters and sacred sites.”

Kemble spent the night in jail with over 20 other peaceful protectors who were arrested and is expected to be released today. The public is encouraged to call Dane County Sheriff Mahoney and County Executive Parisi and asked why Dane County law enforcement have been sent to North Dakota and are now arresting Dane county citizens who are peacefully protecting the water.

Read more about the Standing Rock Sioux and their journey to protect the water here.