Due to bridge restrictions in the town of Mellen, Gogebic Taconite (GTac) is routing their trucks carrying bulk sample rock through the Bad River Band of Lake Superior Chippewa Reservation.

The route of the trucks hauling the samples is from Moore Park Road, east into Hurley on Highway 77, north on 51 and then to Highway 2, back west across the Bad River Reservation, and through Ashland on their way to Minnesota. The loads can’t travel through the shorter, more cost-effective route through Mellen because of a bridge restriction in the center of town.

Controversy continues to follow GTac, as asbestiform minerals have been found and confirmed at several bulk sample sites by Dr. Tom Fitz, geologist from Northland College. Asbestiform particles are responsible for mesothelioma, an incurable lung disease common around iron ore mines. GTac loads stand to spread the airborne particles along the route. 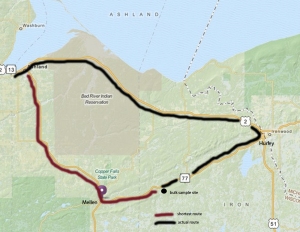 Due to bridge restrictions in Mellen, GTac is being forced to use a longer route through the Bad River Reservation.

In an interview last October with WPR, Bad River Chair Mike Wiggins Jr. accused GTac of covering up the presence of the dangerous mineral. “A cover-up of asbestos [that] geologists and children could walk in there and see with the naked eye,” he said. “[It] is such a compelling, premeditation for disaster, a disaster that would befall the Bad River Reservation and non-tribal people of the Bad River Watershed. It’s a deal breaker. Explode an asbestos rock that Tom Fitz has found with the highest level of asbestos he’s ever seen in some of those rocks and tell me how that’s creating the circle of life. I’ll say this: It’s recreating the circle of life by causing death.”

Wiggins noted that Bad River wardens briefly detained one of the nine trucks that passed through the reservation yesterday.

Meanwhile, about 100 concerned citizens gathered Sunday at the entrance to one of the bulk sample sites to demonstrate support of clean air, clean water and the new mining laws. At least 20 people crossed over into the “forbidden zone” that the latest in GTac-bought legislation created around the bulk sample sites to prevent the public from observing their activities.