A 2 PM Press conference on Moore Park Siding, approximately 5 miles east of Mellen on Highway 77, will feature citizens who will enter the area deemed “closed to the public” by Gogebic Taconite (GTac) officials.

Citizens from Northern Wisconsin, Iron and Ashland Counties, the Chippewa Federation and those with historic ties to the ceded territory in the Bad River Watershed, and others impacted by downstream degradation from the huge open pit operation have declared their intent to violate the alleged closing of Public Managed Forest Lands (MFL) under a special law introduced by pro-mining Senator Tom Tiffany (R-Hazelhurst). Tiffany said it was the intent of the original pro-mining, streamlined permitting process bill, known as SB-1, and written by Gogebic Taconite attorneys, to “allow degradation of the environment.”

Dubbed the “Hunt to Save the Golden Goose” now laying pristine golden eggs of clean water, forests, lakes, trout streams, asbestos-free air and unlimited prosperity in a growing tourist-based economy, this action will include citizens who have worked tirelessly to prevent a mine, once highlighted to be one of the world’s largest open pit mines by Gogebic Taconite, from destroying the livelihood of regional farmers, tourist-based businesses and resource harvesters. The mining project is headed by GTac Manager Bill Williams, currently under investigation for committing environmental crimes in Spain.

While pro-mining legislation prevailed in the GOP-dominated atmosphere of Tea Party politics and millions of dollars in lobbying contributions during the 2010-2012 election cycle, a wide majority of citizens in Northern Wisconsin oppose the project funded by the 18th richest billionaire in the world, Chris Kline of Florida.

Senator Tiffany introduced further legislation to prevent citizens from monitoring mining exploration and charting sedimentation of trout streams and wetlands, reported by the public and confirmed by the Wisconsin Dept. of Natural Resources during drilling in the summer of 2013. The closure also allegedly prevents Chippewa Treaty citizens from observing and harvesting reserved resources. 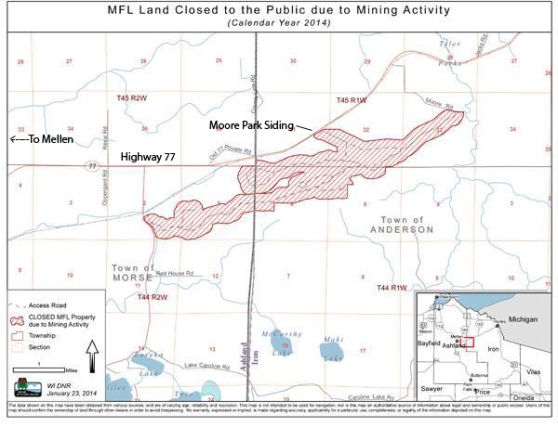 One thought on “Citizens to Challenge Mining Laws”