The Penokee Hills Education Summit will take place Friday and Saturday, September 20 – 21, 2013 at the Whitecap Resort in Upson, WI. One of the keynote speakers for the Friday Water Awards Dinner will be Josephine Mandamin, Anishinaabekwe from Manitoulin Island who made a sacred walk around each of the Great Lakes over a period of give years, and then traveled from Kingston, Ontario to the Atlantic Ocean along the St. Lawrence River.

Cost for the full 2-day event is $49. Register for the Summit here. 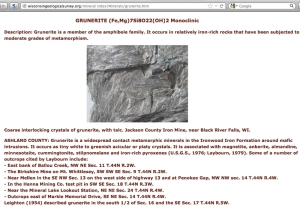 Wisconsin Geological Survey shows grunerite, one of the most toxic forms of asbestos, is present on and near the proposed mine site.

On August 15, 2013 the DNR will hold a public hearing at Hurley High School from 10 AM to 8 PM to hear public testimony about issuing a bulk sampling permit to GTac. Those who cannot make the hearing have until September 3 to mail or email testimony.

Listed below are some talking points. Read the articles and watch the short video to learn why we reject this mining law as illegal and immoral, and why we must reject GTac’s bulk sample permit, for the sake of our children, and our land, air and water.

Why There Will Be No Mine

Asbestos and Cancer: GTac claims there is no asbestos in the Penokee Hills, a well-documented fact.

GTAC Lies About Asbestos In The Penokee Hills

GTac left a mess behind from their core drilling

Being Defrauded by GTac: GTac has lied to the public since the beginning and is still lying
We demand that businesses abide by the law, and county agencies enforce the law.

GTAC’s Militia Allowed to Operate Outside the Law in Wisconsin

Mining Company Has No Answers for Iron County Residents

I am writing to inquire as to why you feel the need at this juncture to propose new legislation restricting public access to mining work sites, and to urge you to cease and desist from these efforts.

Close observation of the activities of Gogebic Taconite by the public has yielded important information about how those activities are being conducted and whether or not they are complying with their permits and the law. Visitors have observed several violations of DNR rules, such as long ruts and standing water in the access road, slipshod erosion control, groundwater leakage from drill holes, and the spread of invasive species, as well as observing the presence of endangered and threatened species on the mine site.

Your bill would provide legal grounds for G-Tac to prohibit the public from observing their activities, potentially leading to environmental violations that go unreported. Most areas of the mine site are densely forested, and the 300-foot perimeter that you propose would prevent the bulk sampling sites that G-Tac wants to access from being visible to the public.

As you know, on June 11, a group of protesters approached workers at Gogebic Taconite’s proposed mine site and committed minor acts of vandalism and shouting of obscenities. This action was taken without consultation from groups who have been actively opposing G-Tac for more than two years, and was rightly condemned by those groups as illegal. No other violent acts have been committed by protesters, but were they to be, local law enforcement have already demonstrated that they are equipped to handle it professionally and appropriately, without more complicated regulations requiring enforcement. In fact, many other mine opponents have been up to the site and had friendly interactions with workers and security guards.

However, what is much more dangerous than some irresponsible youths is the paramilitary-style security forces armed with high-powered assault rifles that G-Tac has hired to intimidate observers away from visiting the site and seeing their operations. Amidst this atmosphere of intimidation, there have been minor acts of vandalism committed against those staying at LCO’s Harvest Camp, which had its flags stolen and an obscene and threatening sign posted next to it. One mine opponent was assaulted by G-Tac’s Bill Williams in June, but charges were never pressed by the local District Attorney despite a criminal complaint.

I much appreciate the letter sent to G-Tac by Senator Jauch and Representative Bewley condemning the use of these security forces. Now, in spite of Bulletproof Security and G-Tac clearly having broken the law, the Department of Safety and Professional Services has elected not to follow their own rules barring unlicensed outfits from the state for a year and instead grant BPS an immediate permit to resume their work for G-Tac.

I know you are well aware of the destruction a 4 ½-mile long, 1,000-foot deep open pit iron mine would do the groundwater, waterways, wild rice beds, and air quality of northern Wisconsin. I do not know if you are aware that in their latest bulk sampling application, G-Tac disputes the opinion of professional scientists that there are dangerous asbestiform minerals in the iron deposit that could give their workers and surrounding residents mesothelioma when blasted to bits (and no, 300 feet is not an adequate perimeter to prevent bystanders from inhaling these needle-shaped dust particles).

The pretense used to justify the presence of the BPS guards—that G-Tac is concerned for the safety of their workers on the site—is clearly false. It’s just one more lie in a long string of fictions spun by the company, beginning with their statement in early 2011 that they had no interest in changing Wisconsin’s mining laws to facilitate their project. Their submissions to the DNR and work on the ground have shown a lack of experience or professionalism that is shocking to behold. They are a fly-by-night outfit that is looking to get a quick ripoff of our natural resources while the corruption of the legislative majority allows it, then stick Wisconsin taxpayers with the wrecked environment, wrecked economy, and long-term bill for the cleanup.

I urge you to please focus your lawmaking efforts on preventing the use of assault rifle-armed security guards at the site. Make destruction of the living, breathing Penokee Hills a felony. But please, don’t use your influence to hamper efforts of the public to stop this mine. Those efforts will continue regardless, but whether you will be regarded as helping or harming them remains to be judged by history. 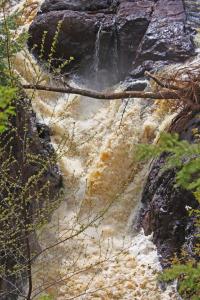 MADISON – The Department of Natural Resources has scheduled a public informational hearing August 15 on the proposed bulk sampling activity and the preapplication notice to mine at Gogebic Taconite’s potential mining project near Mellen, Wisconsin.

The bulk sampling activity and potential mining site are located in the town of Anderson, Iron County, and the town of Morse in Ashland County, with the majority of the site in Iron County. For bulk sampling, the company has proposed to remove a total of 4,000 tons of rock. The rock would be removed from four or five sites using standard excavating equipment and could also involve some blasting activity. The rock would be loaded on to haul trucks and transported off-site for testing and analysis.

The hearing will be held at the Hurley High School, 5503 W. Range View Drive, Hurley, from 10 a.m. to 8 p.m. The hearing will be a public informational hearing, where individuals can provide oral or written comments as well as learn about the proposed bulk sampling activity and the preapplication description of the potential mine project.

Agency staff will provide a brief summary of the available information about the bulk sampling and DNR approvals needed by Gogebic Taconite. These informational presentations will be at 10 a.m. and again at 5 p.m., The department will also provide a summary of the steps that must be followed prior to the submission of a mining application for the project.

The public may also submit written questions at the hearing through the hearing officer, and there may be an opportunity for department staff to respond as part of the hearing.

Any member of the public may also submit written comments on the proposed bulk sampling activity or the preapplication description of the potential mining project. The DNR will review all comments that are received on or before Sept. 3, 2013.

Comments may be submitted via mail to Larry Lynch, DNR, 101 S. Webster Street, Madison, Wisconsin 53707, or by e-mail to: DNRWAMINING-GOGEBICTACONITE@Wisconsin.gov.

Information submitted to the agency by Gogebic Taconite, including the proposed bulk sample plan and preapplication description, is available on the Gogebic mining project page of the DNR website. People can sign up to receive email updates on the project through that page by clicking on the link for “subscribe to Gogebic Taconite project email updates.”