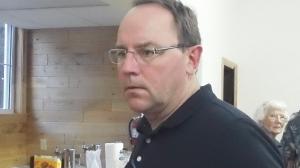 Video and Audio Tapes Show that Senator Tiffany’s Comments About WWF Presentation’s on Zoning In Iron County Vary 100% From the Truth.

Poynette: Last Thursday evening, Wisconsin Wildlife Federation Executive Director George Meyer made a two-hour presentation on local regulation of mining at the request of the neutral and nonpartisan Iron County Citizens Forum. The Forum has put on a series of unbiased programs on various aspects of the proposed iron mine in Ashland and Iron counties. Mr. Meyer was asked to put on a presentation on the role of local zoning and local agreements with mining companies as part of metallic mining projects in the state. State law specifically authorizes local units of government to adopt mining ordinances and enter into local agreements. This has been the common practice of local units of government in all recent mining projects in Wisconsin. The purpose of local ordinances relating to mining are to protect private property rights and to protect county taxpayers especially when, as in the Iron County situation, four thousand acres of county land will be used for the mining project.

“It is very difficult to understand why Senator Tiffany who was present at the Forum would risk his personal credibility by making such a clearly untruthful statement when he was fully aware that the whole two hour presentation was being video and audio taped,” stated George Meyer, WWF Executive Director. “Following is an exact transcription of my comments on the issue of a county mining moratorium as recorded by an audio tape of the complete presentation.”

Transcription of the recording of George Meyer’s remarks about a two-year moratorium presented at the Iron County Citizens Forum, Thurs., June 27th in the Town of Oma Hall:

1. “What many of these counties have done, (speaking about frac sand mining) put a 2 yr moratorium and that’s legal but you have to do it with the intent to adopt an ordinance, otherwise it’s confiscatory. And they can sue for that. What it basically is so they can freeze the situation so they can develop the proper regulation. That’s a pretty strong message and I don’t know that I would advise that. I think the county’s (Iron County) approach of putting out a place holder (ordinance), it gives you some protection even though it might not do all the things necessary as Ashland’s does, but it puts the company on notice which is fair to the company that there is going to be a local zoning rule and it’s in fact that a local impact agreement is going to be. I think it’s a sound idea and then you can come back in and come in with a more complete ordinance after you have more chance to research, far friendlier that putting a moratorium in place.” and

2. “and believe me, I think you heard I don’t think moratorium’s are a friendly document.” and

3. “Q. Can Iron County still enforce a moratorium that you mentioned? A. “I think it’s a wise decision to propose an ordinance rather than say nothing happens for 2 years.”

Senator Tiffany then when on to assert in his press release and comments: “I have no problem with anti-mining groups making a presentation, but do not pretend to be neutral arbiters when an anti-mining advocate like George Meyer is the presenter.”

In response to this statement, Executive Director Meyer indicated: “Senator Tiffany’s statement ignores the fact that during my presentation I repeatedly stated 1. that neither I nor the Wisconsin Wildlife Federation has taken a position on the proposed Penokee mine, 2. that in my former DNR career, I was involved in the approval of metallic mines in the state, 3. that when I was DNR Secretary, both Governor Thompson and I were routinely criticized and protested as being pro-mining and 4. that, in my Thursday remarks, I repeatedly spoke approvingly of the Flambeau and Jackson County mines and their associated mining companies: Kennicott Copper and U.S. Steel”.

The Wisconsin Wildlife Federation, founded in 1949, is the state’s largest conservation organization, and is comprised of 185 hunting, fishing and trapping organizations. Its Mission is conservation education and the advancement of sound conservation policies.