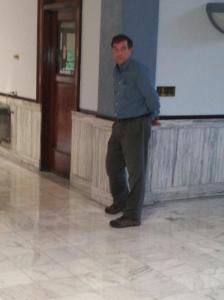 Earlier today, after the Ashland County Board passed a metallic mining zoning ordinance 18 to 1, GTac President Bill Williams allegedly ripped a citizen’s cell phone from his hands as he was recording.

According to David Joe Bates, he was listening and recording a discussion with Ashland County Administrator Jeff Beril on some issues about the ordinance when Williams ripped his phone out of his hand.

“I filed a complaint with the Ashland City police. We’ll see what happens next,” said Bates. “I took it right back and told you better not ever touch me again!”

GTac filed their preapplication notification on Monday before the Iron County Zoning Committee met to discuss their new metallic mining ordinance. Apparently, the mining company rushed to file in an attempt to circumvent the new zoning ordinances both counties are putting into place.

Last Tuesday, when someone snatched a phone from a drilling site observer, Gtac referred to them as “Al Queda” and “eco-terrorists.”

Below is a video of Bill Williams, speaking at an event in Ashland in early 2011, assuring the audience that they will not be changing any of the then-current mining laws of the state. As it turned out, he and GTAC were in the process of writing the new mining bill even as he spoke.

UDW believes that the real eco-terrorists are GTac, who have lied to the people of northern Wisconsin throughout the entire process, and who will destroy not only the Bad River Watershed with their proposed 22-mile open pit mountaintop removal iron ore mine in the Penokee Hills, but perpetrate the genocide of the Bad River Tribe of Lake Superior Chippewa, whose reservation is only six miles from the proposed mine site.