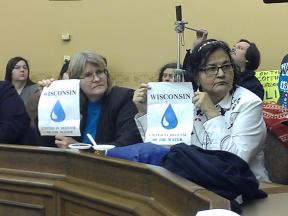 Citizens united in defense of the water at the Mike Wiggins Jr. press conference yesterday at the Capitol.

Yesterday, the Wisconsin Assembly passed AB/SB1, the new mining bill. And because of SB2, which changes the way a law is enacted, there will be no more ten-day waiting period for the Secretary of State to publish it. As soon as it is signed, it will become law.

Throughout the debate yesterday, Republicans appeared to be representing the mining company. Their arguments were weak, and they repeated their misinformation and lies over and over. No matter how passionate, truthful, measured, or clear the Democrats were in their debate, the Republicans rejected the truth, refused to accept any amendments brought forward, and in the end, as we expected, passed the bill along party lines.

Meanwhile, at a press conference, Bad River Tribal Chairman Mike Wiggins Jr. and several members of the Tribal Nations came together to show solidarity with Bad River.  Present were members of several of the Federally recognized tribes of Wisconsin, including the Menominee, Stockbridge-Munsee, Lac Courte Oreilles, Lac du Flambeau, and Ho Chunk bands, as well as Keweenaw Bay, Michigan. Each tribal member stood in support of Bad River and Wiggins, and made it clear that all 11 Wisconsin Tribal Nations stand in support as well.

The Great Divide, near Glidden, WI

Wiggins spoke of the possibility of genocide, as the dangers of a mine will certainly guarantee contamination of the watershed. The Bad River flows south out of Caroline Lake for a few miles until it tuns west and heads back north, and the Tyler Forks heads north until it turns west and heads back south. Both meet at Copper Falls. The Great Divide is further south, around Glidden. Water from all sides of the mine site will go into the Bad River.

“We have nowhere to run. Nowhere to relocate to if ground water contamination occurs or heavy metals and other toxicity come down our waterways. We have an ancient connection that will compel us to resist all efforts to essentially mine and/or destroy the headwaters of our homeland.”

4 thoughts on “Wiggins: This Is about Humanity”